The use of gravity data to retrieve information related to the subsurface is a quite classical technique in geophysical exploration and it is still nowadays an important source of information. In fact it allows retrieving knowledge on the geophysical characteristics of large areas and at unreachable depth respect to other techniques. Consequently, gravity inversion represents an optimal tool in the initial phase of an exploration project since it can be used to optimize the design of more expensive activities, such as seismic acquisitions. 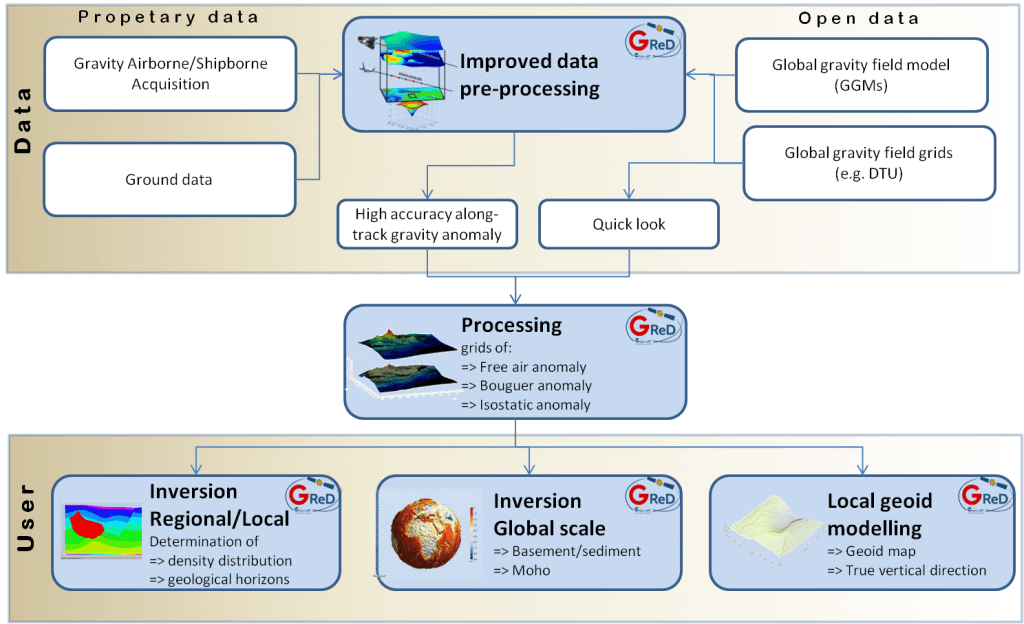 Gred has developed innovative methodologies and advanced techniques for the acquisition and processing of gravity data. GReD solutions will allow to obtain higher accuracy airborne gravity observations, by combining the potential of multi-constellations satellite navigation systems with the gravity data coming from the most recent dedicated satellite missions.

GReD is developing innovative solutions aimed to combine qualitative geological information with quantitative gravity data in a Bayesian framework. The results is a 3D model of the structure of the Earth’s crust, preserving the original intrinsic characteristics, i.e.  with sharp boundaries between different layers and structures, with realistic densities variations, and fitting the gravitational observations..

GReD has developed a service to exploit gravity observations, integrated with others in situ data, e.g. derived from seismic profiles, to study and build 3D models of the Earth crust at regional scale. The service results will primarily help oil & gas companies in the identification and selection of the most promising acreage, from a petroleum point of view, in the early stage of the exploration activities.

In 2012 the GEMMA project funded by Politecni-co di Milano and the European Space Agency, through the Support To Science Element pro-gramme (Contract No. 4000102372/10/I-AM) demonstrated the possibility to exploit GOCE gravity data to model the main features of the crust both globally and regionally.
The use of satellite data for this activity in fact, offers the main advantage of giving a regional outline of the crustal architecture that cannot be obtained by local seismic profiles or gravity ob-servations.
This dataset can be profitably used in the so called “Assets e Prospects” operation which takes place before the upstream activities.

In the early 2020, the European Space Agency (ESA), through the ESA SPACE SOLUTION program (https://spacesolutions.esa.int/), funded the GIADA (Gravity for lIthosphere Architecture Determination and Analysis) project, endorsed by the Italian Space Agency (ASI) and by European major oil & gas companies. The main objective of GIADA was to develop a set of services to exploit gravity data, derived mainly from satellite observations, for natural resource explorations activities.
During the project the GIADA Team has developed a set of algorithms to interpret and invert the gravity field. These algorithms have been tested on a real case study in the Central-Eastern Mediterranean Area. 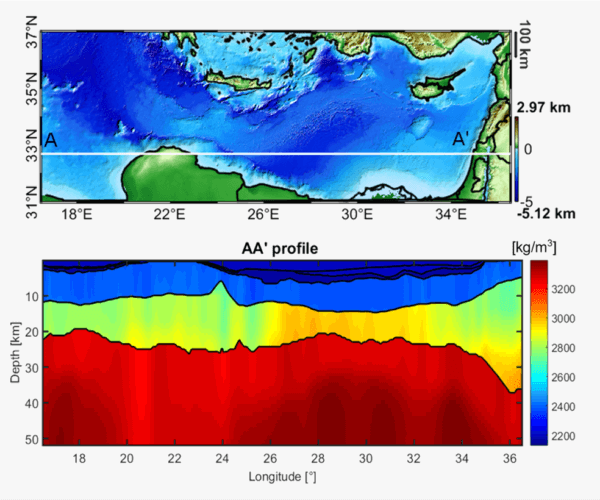 Gravity data have been used to improve the definition of homogeneous (from the density point of view) geological crustal regions and to provide information on the nature of the studied crust.

Moreover the 3D inversion of the gravitational field, properly complemented by external information (such as density models, seismic profiles, etc.) allowed to estimate maps of the depths of the main geological horizons (including the Moho and the basement) and to retrieve a complete 3D modelling of the density distribution.

The principal results of the Central Eastern Mediterranean Sea case study, freely available for download, are:

The data can be requested by compiling the following form