GReD is a Politecnico di Milano spin-off SME that studies, designs and develops innovative and highly customized solutions based on geomatic technologies

GReD primary objective is to take to the market, with passion and competence, our R&D experience cultivated at Politecnico di Milano in the following application areas:

“GReD is a spin-off of Politecnico di Milano, born in the framework of the PhD course on Geodesy and Geomatics (later Geomatics and Infrastructures), as an agreement between myself and four of the Doctors that got their degree between 2009 and 2011. The idea was that there was too much competence built in several branches in Geodesy and Geomatics, to let it be dispersed in the general market. The previous experience with some leading companies in the area, like ESRI Italia, convinced us and the partners that, with a wise management of competence and a serious engagement in transforming ideas into products of industrial value, we could afford the gamble of founding a company having a significant probability of success. Furthermore, matters like the analysis and interpretation of the gravity field, the analysis of GNSS data to monitor the environment (including atmospheric sounding) and structures/infrastructures not only required a high level of competence on the existing techniques but also a capability of developing and implementing new ideas at the frontline of research and maybe a little beyond.” 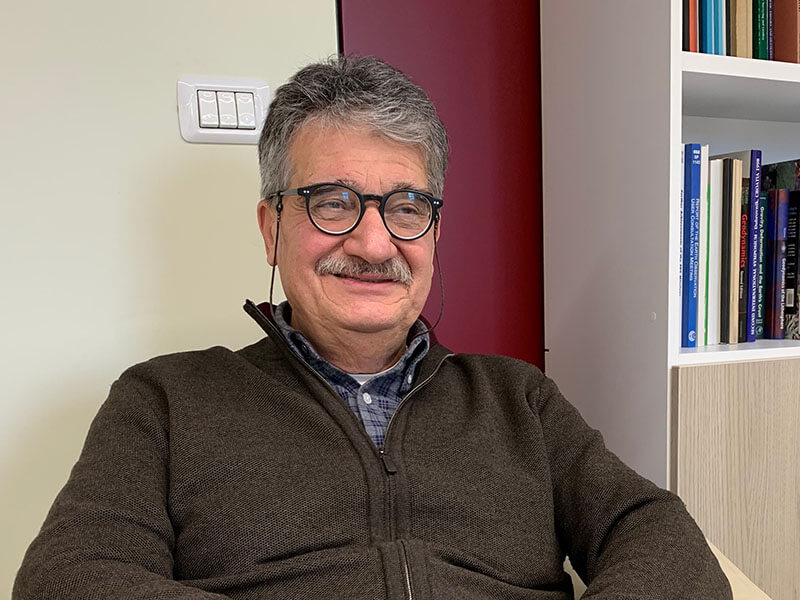 Fernando Sansò is a full professor at Politecnico di Milano, Department of Civil and Environmental Engineering (DICA).
He received his degree with honours in Physics from the University of Milan in 1967.

From 2008 he is Editor in Chief of the new Bulletin of Geodesy and Geomatics and Member of the Editorial Board of the Rendiconti Lincei: Scienze Fisiche e Naturali. He is author and co-author of about 350 works, articles and conference reports half of which at an international standard. He is also Editor of 4 books of Lecture Notes and several volumes of the Proceedings of IAG Symposia with Springer-Verlag. 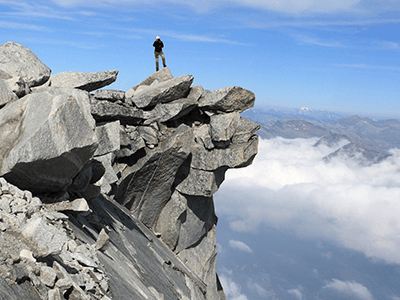 Stefano Caldera got a Master of Science in Environmental Engineering and a Ph.D. in Geomatics and Infrastructures at Politecnico di Milano. His main focus is on GNSS data processing. Co-inventor and manager of the GeoGuard monitoring service.

Stefano Caldera graduated in 2006 in Environmental Engineering at Politecnico di Milano. In 2010 he received his PhD in Geomatics and Infrastructures (with honours).

The main research activity concerns GNSS data treatment for high precision applications, with a focus on GNSS permanent station networks for positioning services (adjustment and quality) and deformation monitoring, and networks relating to global and cartographic reference systems.
Author and co-author of publications in international peer-reviewed journals since 2006. He has participated in national and international conferences with oral presentations both as a speaker and with posters. 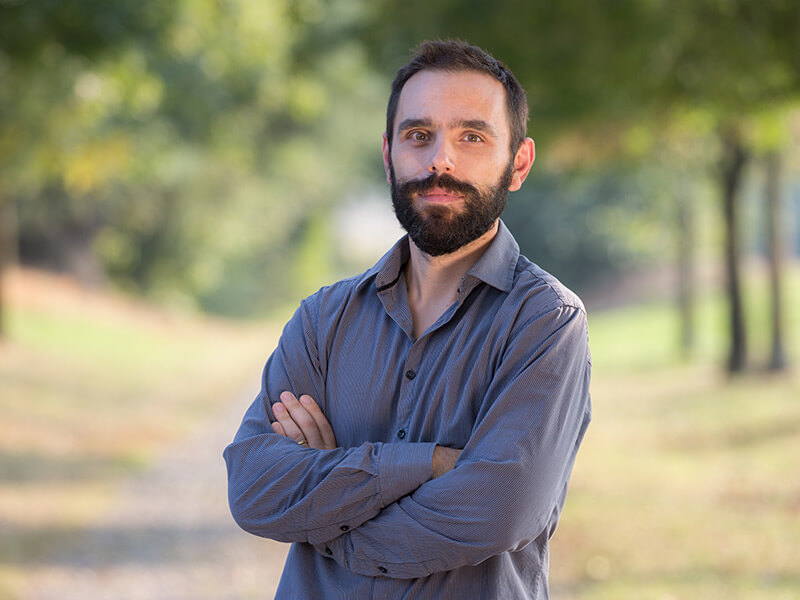 Daniele Sampietro got a Master of Science in Environmental Engineering and a Ph.D. in Geodesy and Geomatics at Politecnico di Milano. His main focus is on applications of potential field methods for geophysical exploration.

Daniele Sampietro is BOD member and senior researcher in GReD s.r.l. He received is PhD degree with honours in 2009, whit a thesis on the “Inverse gravimetric problem with GOCE data”.

From 2009 to 2011 he was postdoctoral researcher at Politecnico di Milano, working on the modelling and inversion of the gravity field to estimate geoid undulations and crustal structure at regional scale.

He has been principal investigator of the GEMMA project (GOCE Exploitation for Moho Modeling and Application), funded by ESA in the framework of STSE program from 2011 to 2012 and of the GIULIA project (Gravity Inversion to understand Lithospheric Architecture), funded by ESA in the framework of VAE program from 2016 to 2017. He has been involved in the FP7 project “GAL – Galileo for Gravity”, in the national project “GOCE-ITALY” and in the INTERREG project “HELI-DEM: Helvetia-Italy Digital Elevation Model”. He won the AGLC “Licio Cernoboro” award for young researchers in the “Applied Geophysics” session of the 32nd national conference GNGTS. From March 2016 he is principal investigator of a project for upstream activities for a major oil & gas company aiming to develop advanced techniques for the acquisition, processing and inversion of gravity data.

In GReD his main research activity concerns the processing and interpretation of the Earth’s gravity field with particular attention to the observations of the GOCE satellite mission and of airborne derived gravity for oil & gas exploration. Other areas of research include statistical data analysis, with applications to the estimation of the geoid and surveying integrating classical observations with GNSS data.

Since academic year 2005/06 he has been held lessons, exercises and labs at Politecnico di Milano. Among them he teached Topografia, Rilevamento e Posionamento, Photogrammetry, Cartografia Numerica, Gravity Prospecting, Gravity interpretation, Atmospheric Physics and Archeoastronomia. In 2012 he has been held a seminar on the use of GOCE data for the Moho estimation in the Phd course of Geodesy and Geomatic of Politecnico di Milano and at the Dipartimento di Fisica e Scienze della terra of Università di Ferrara.  He has been co-tutor of 6 Master Degree thesis and 1 PhD Thesis. He is external expert for the “Modelling the Earth’s crust: From outer space to deep under” project, funded by Netherland Organization for Scientific Research, and proposal evaluator for the Czech Science Foundation, (2012 – 2017) and Netherland Organization for Scientific Research) (2016). Author and co-author of about 30 publications peer-reviewed at international level. Since 2006 he has participated in national and international conferences with about 30 oral presentations, half of them as a speaker, and about 30 posters. 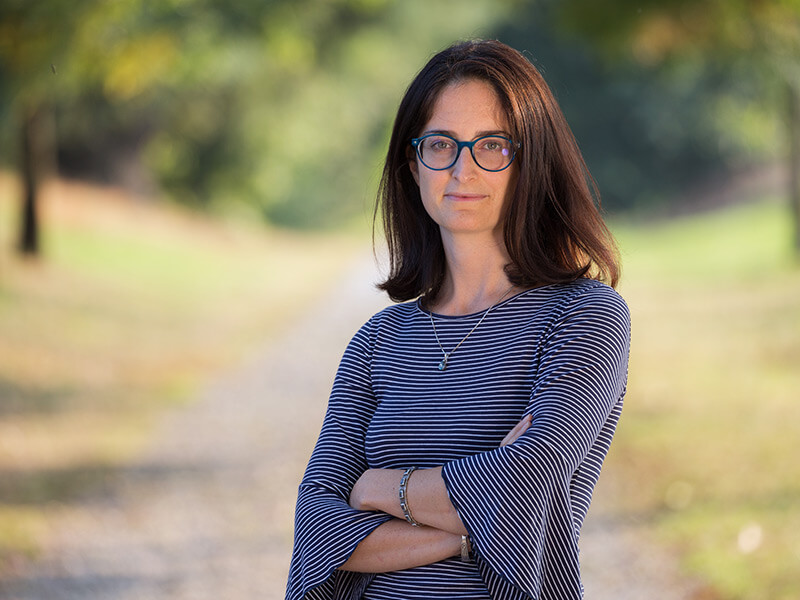 Lisa Pertusini got a Master of Science in Environmental Engineering and a Ph.D. in Geomatics and Infrastructures at Politecnico di Milano. Her main focus is on applications of GNSS precise positioning and business development.

Master degree with honours in Environmental Engineering in 2006 at the Politecnico di Milano, with a dissertation about the use of ENVISAT and QuikSCAT satellite data for the estimation of the sea-ice extension and thickness in the North-East of Greenland. This study was performed during her 6 months permanence at the Niels Bohr Institute (University of Copenhagen) in Copenhagen.

PhD with honours in Geomatics and Infrastructures at the Politecnico di Milano with a thesis titled “Error budget of future satellite missions to monitor gravity field time variations” (2011).

From April to December 2011 she worked for Galileian Plus s.r.l. with a project based contract, mainly on GNSS topics, in particular navigation issues

Since February 2012 she has been working for GReD s.r.l. 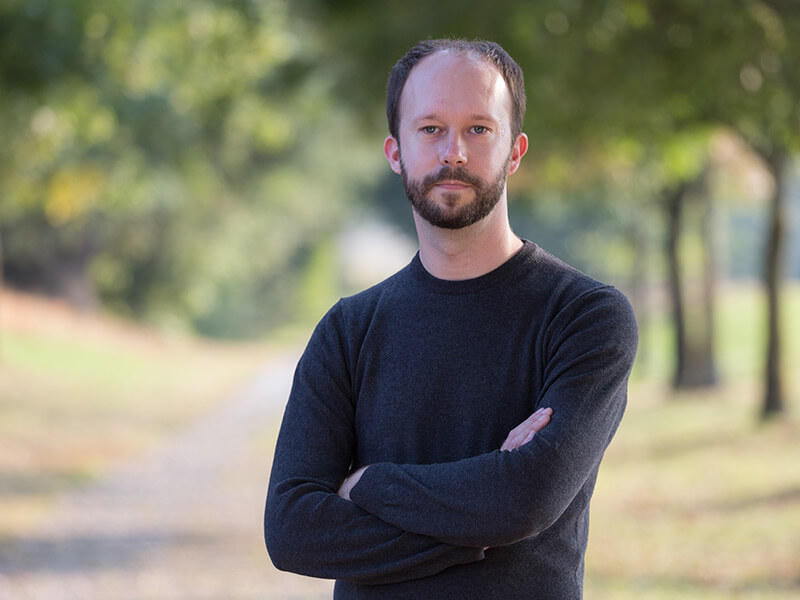 Eugenio Realini got a Master of Science in Environmental Engineering and a Ph.D. in Geodesy and Geomatics at Politecnico di Milano. He focuses on applications of GNSS for geosciences. Co-inventor of the GeoGuard monitoring service.

Eugenio Realini got his Master’s Degree in Environmental Engineering in 2005, and his Ph.D. in Geodesy and Geomatics in 2009 (with honours), both from Politecnico di Milano (Italy).

His research activities focus on GNSS positioning and GNSS-based tropospheric analysis. He is co-founder and developer of goGPS, an open source software application for GNSS positioning.

In 2009 he was postdoctoral researcher at Politecnico di Milano, working on open source geographic web services. In the same year, he was awarded a postdoctoral fellowship by JSPS (Japan Society for the Promotion of Science), for continuing his research at Osaka City University (Japan), on GNSS positioning provided as a web service. From 2011 to 2014 he worked as a postdoctoral researcher at Kyoto University, where he conducted research on troposphere monitoring and analysis, experimenting the use of the Japanese satellite system QZSS, in conjunction with GPS, for precipitable water vapour estimation at a local scale by means of dense receiver networks.

He is a double-winner of the European Satellite Navigation Competition 2015, having been awarded the University Special Challenge Prize and the Netherlands Regional Prize for a project on the deployment of low-cost GNSS stations in East Africa for atmospheric water vapor monitoring, in collaboration with Prof. Nick van de Giesen of Delft University of Technology.

Eugenio coordinated the H2020 project GIMS (https://www.gims-project.eu/) and the ESA project HYPER-5G (http://www.hyper5g-project.eu/). He led GReD activities in the H2020 projects BRIGAID (https://brigaid.eu/), TWIGA (http://twiga-h2020.eu/) and SINOPTICA (http://sinoptica-project.eu/), in the ESA projects STEAM (https://www.researchgate.net/project/METAWAVE-STEAM) and CAMALIOT (https://navisp.esa.int/project/details/148/show) and in the Fondazione Cariplo project LAMPO (http://lampo.polimi.it/). He is author and co-author of about 40 publications, half of which on international peer-reviewed journals. He held exercise lectures, laboratories and seminars on GNSS-related topics for academic courses in Italy (Politecnico di Milano), Switzerland (ETH), Japan (Osaka City University, Kyoto University) and China (China University of Mining and Technology of Beijing). Since 2012 he is member of the Japan Geoscience Union (JpGU). 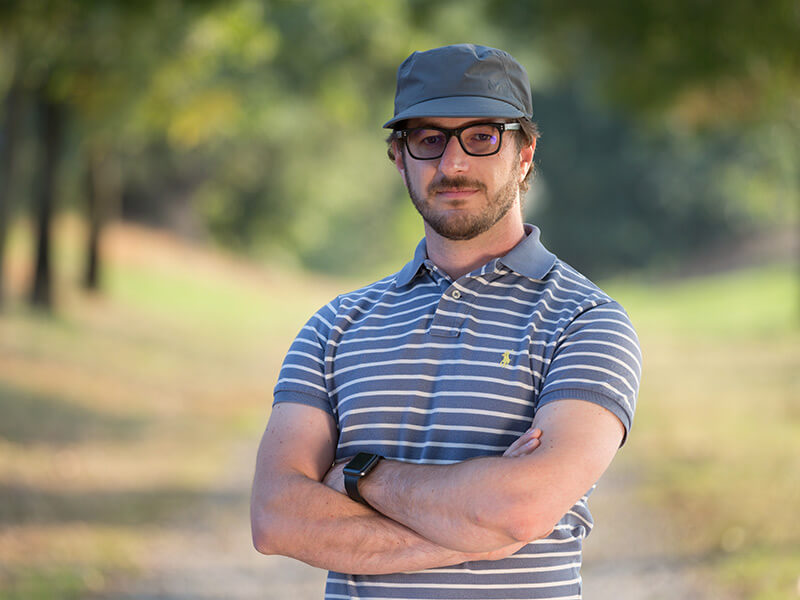 Andrea Gatti got a Master of Science in Computer Engineering and a Ph.D. in Environmental and Infrastructure Engineering at Politecnico di Milano. He is now mainly focused on the re-design, optimization, and development of GNSS processing software.

Andrea Gatti got a Master of Science in Computer Engineering and a Ph.D. in Environmental and Infrastructure Engineering at Politecnico di Milano. He largely contributed to the development of the space-wise approach for the analysis of gravity data of the ESA-GOCE satellite mission, using which, he computed the global gravity model GO_CONS_GCF_2_SPW_R5 available at the International Centre for Global Earth Models archive.

His research is focused on the development of code for data analysis with a special attention to processing performances and parallel execution. At the beginning of 2017, he oriented his studies to the analysis of GNSS data and started working on a project aiming to tropospheric analysis through the usage of GNSS data for the calibration of SAR APS data.

He became one of the major contributors to the open-source software called goGPS, an application for the analysis of GNSS data. In 2017, he started a new development branch that led to large improvements in performances and usability by a complete re-write of most of the code. The new goGPS focus, now shifted to the processing of continuously operating stations, will allow the project to grow for the next years. 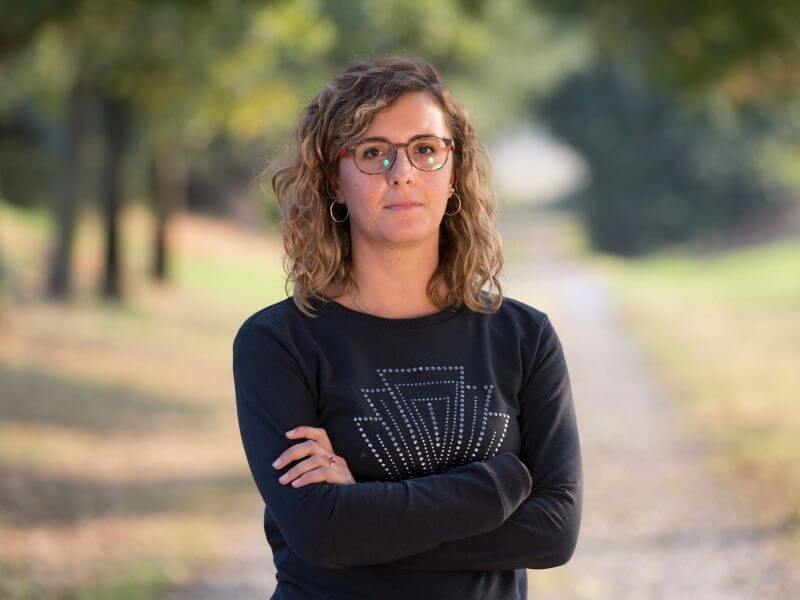 Martina Capponi got a Master in Environmental Engineering and a Ph.D. in Transportation and Infrastructures at Università di Roma La Sapienza. She is focused on the development of processing software for geophysical exploration.

Martina Capponi got her Master’s Degree in Environmental Engineering in 2014 and her Ph.D. in Transportation and Infrastructure at Università di Roma La Sapienza. Her Ph.D. thesis was titled “Very Improved KINematic Gravimetry: a new approach to aerogravimetry”.

From 2014 to early 2019, during her Ph.D. studies, she was also a research fellow at Politecnico di Milano, where her work was mainly focused on potential field methods and the development of processing software for geophysical exploration applications. Within this period she held exercise lectures and laboratories at Politecnico di Milano for courses of the Bachelor and Master Degree in Civil and Environmental Engineering (Topography, Cartography, Positioning and Location Based Serveces).

Since 2014 she attended various international and national conferences as a speaker and she is author and co-author of publications peer-reviewed at international level.

In GReD her principal research activities regard the development of software for processing and interpreting the Earth’s gravity field in the framework of oil&gas exploration applications. 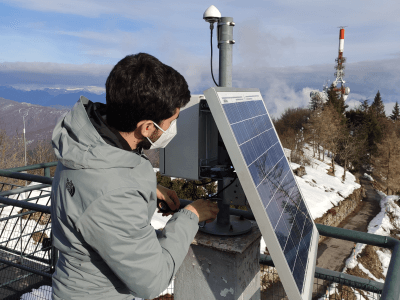 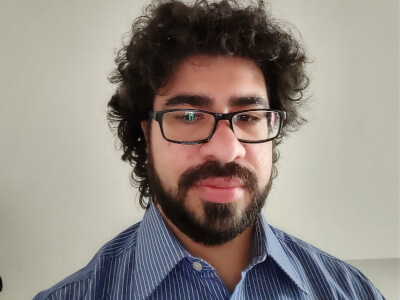 Alessandro Fumagalli got a Master of Science in Sciences and Technologies for Environment and Landscape at University of Milan – Bicocca. He is mainly focused on optimization and development of GNSS data acquisition and processing software.

Alessandro Fumagalli got a Master of Science in Sciences and Technologies for Environment and Landscape at the University of Milan – Bicocca in 2020. He previously developed programs in Python and R for Molecular Mechanics and other bioinformatics applications.
Since March 2022 he is part of the GReD team, mainly focusing on developing code for the in-house software BREVA and the open-source software goGPS for GNSS positioning, and on developing Kalman filter algorithms and software for the HYPER-5G project.

Manage Cookie Consent
To provide the best experiences, we use technologies like cookies to store and/or access device information. Consenting to these technologies will allow us to process data such as browsing behavior or unique IDs on this site. Not consenting or withdrawing consent, may adversely affect certain features and functions.
Manage options Manage services Manage vendors Read more about these purposes
View preferences
{title} {title} {title}
Go to Top